Reanimating the community through a gamified system of missions

Introduction
Not sure how I should start about this, so I am just going to roll on with my idea. It’s not a secret that just like any other project in the space, we’re taken down by the bear. Efforts are being made to reanimate the community, and I like to think I might have found just the perfect instrument for that. This is a proposal on how we can bring life to our community through a, kind of, gamified tool. Following the discussions we had at the summit, I do think that this instrument could also help us reach some amazing metrics which would lead to that 3rd airdrop as well.

Tool
The tool I am talking about is - https://crew3.xyz.

How it works:
Crew3 is a gamified ”missions” tool. What that means is, Stakeborg DAO can set up its profile with them, and create all kind of tasks for people to execute. The tasks can run from simple to complex, the border of it being only our imagination. For every completed task a user gets an XP reward. The XPs themselves don’t carry any monetary value, they are there just to rank people based on how many task they complete, therefore keeping a Leaderboard.

A task sample:
I wanted to present it with screens, but new users (which I am on this platform) can use only one embed media in their proposal. So, let’s say the task is to make a tweet about Stakeborg Dao. Verification set to link. So everyone who completes the task, submits a link to their tweet. As soon as someone did so, the admin gets a notification about a pending mission, he checks it and accepts or rejects the claim.

The Crew3 bot:
The instrument can be integrated with our discord server, by inviting their bot in. Below is a list of what the bot can do, and as you can see, it can help building some momentum with all kind of notifications and other features it has. Of course, inviting the bot in should not happen before some more research over this, but seeing how many projects already use this instrument I’d think it’s safe enough to use it.

IMPORTANT: Using the bot is not a must. We can use the crew3 platform without the bot, if we fear it. 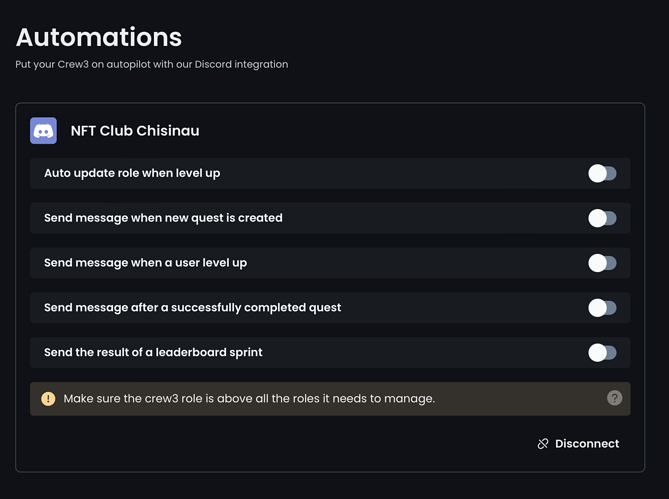 What can we achieve with it:
As I said above the possibilities are endless. We can turn basically anything into a mission. Make a tweet, invite people to discord, suggest a good article to read, take a picture of yourself in a public place wearing Stakeborg Dao t-shirt, send feedback on CAD episodes etc. Quizzes can also be organized using CREW3. So for example instead of having the quiz run on discord we can post all questions here, having them unlocked one by one as you answer the previous one.

Motivation:
Although I hate asking for money, in any circumstances, it’s obvious that setting some rewards in place for the most active members of the community will take us a long way. I have no idea on what the rewards should be, opened to suggestions and comments.

Let’s start:
As an initiator of this proposal, I present myself available to run this thing for a trial run, for free.

Hard truth to admit:
I did not think I will struggle so much writing this proposal. I am so exited about the instrument and what we can achieve with it, but when putting it into words, I feel like it doesn’t sound even close as fun as it really is.

Bottom line is that instead of struggling to try and make people to interact on discord we can create a gamified experience for them, where they would complete little missions everyday competing in a leaderboard, ideally with some rewards for those who really put in the work. Who knows if the trial run goes well, we might choose our next ambassadors through this, just an idea.

I think the level of engagement on Discord is not only influenced by the general bear market, but by systemic issues StakeborgDAO has and does not address head on.

I wouldn’t get too excited, I think this is merely a band-aid, but that’s just my personal opinion.

I don’t see a reason to not try though, and encourage you to continue working on this and admire your initiative.

I think it’s a great initiative, but you need a lot of time and cigarettes to make it work.

Willing to put in the effort

I really admire you that you are finding the resources to continue to #buidl during these tough times. Maybe it’s because your handle, that you are friend with the bears.

I believet that this initiative has the potential to gamify StakeborgDAO’s members experience and be used in the onboarding process.

Before doing any of the above, I would first focus on forming a team that would help you with that. Taking the PM role is great, but having a team with you will help a lot. Maybe you can reach out to some of the onboarding team as well.

I am also willing to participate in the calls and provide my feedback on the framework set-up, however, due to my other responsabilities, I won’t be able to get actively involved in the build.

Hope that my feedback was clear and helpful, but feel free to tag me if you have any questions!

Hey brother! Let’s start this and see where it takes us.

I agree with what @ostanescu is saying here. Still, I would just plug this and start playing, see what makes sense, how the community reacts, then come up with a formal proposal after few weeks of experimenting with the tool and the community.

Thank you for taking the time to come up with these ideas! I, for example, was a big fan of the quizzez and it was something very fun, challenging, and also my “comfortable” way of interacting with the community! A lot of topics, discussions are sometimes very technical for me so this was my place! I had my alarm set every week (mmm almost

Gm @olywebart ! Is/ will there be a follow up on your idea? Are you planning to move forward with it? Thanks!

Yes. I am working on the new proposal following the given template. Updates coming soon.

This is great news! Looking forward to it!

Everyone, an updated version of this proposal can be found here.

Reanimating the community through a gamified system of missions V2.0 Proposals

A. Summary Hello everyone. I thought I’d edit the previous proposal by going CTRL+A / Delete, and rewriting it, but there is no such option for me yet. Therefore, if you stumble for the first time on this, you can refer to V1 of this proposal here - https://agora.stakeborgdao.com/t/reanimating-the-community-through-a-gamified-system-of-missions/281/12 From the feedback I gathered, it seems like pretty much everyone is more or less familiar with the crew3 tool, which is actually a good thing, be…

Thank you everyone for your support. I really hope we can kick this one off soon.