The (DAO) tooling space is generally much discussed in the crypto space, as it pertains to the infrastructure we so much desire and need for the industry to go forward. However, despite all efforts until now, currently-existing applications are seldom interoperable and usually serve a handful of tasks, thus leaving some subsets of crypto hardly covered. DAOs, as entities, are among the least favored by this, citing regulation concerns, complexity in designing and coding and their young age.

Whenever there are gaps in any market, there are also opportunities, and we see the challenge of the current state of the DAO tooling space as an opportunity rather than an obstacle. As such, this proposal’s aim is to introduce a previously discussed tool whose birth is the collaboration between Ioan, one of the oldest members of our DAO and the bootstrapping team. The gathered expertise served us well in designing an MVP and gathering all-around information on the necessary processes for creating what we call I1.

I1’s primary goal is to be a user-friendly tool to visualize DAO data in near real-time, such as treasury, inflows & outflows, contributors, activity stats and more. The grand vision for I1 is for it to be protocol & chain agnostic, allowing all DAOs to input their key addresses and receive reports on their situation. In the MVP, however, we will focus to bring the functionalities to the Ethereum network.

I1 democratizes access to quality financial data, filling the existing pricing gap between the two most similar products. Its usefulness comes for both DAOs as entities, under the form of better visualization of their work, for contributors who can work with precise data in their analysis and strategy and outside analysts & media outlets for aggregate, reputable data for research and articles. There’s no real reason for any DAO to not afford quick, quality data for their own resources with easy onboarding. I1 makes full use of automated reports, making personalized insights cheaper than the competition and allowing for better scaling given increased demand.

Given that I1 is just getting started, the MVP’s features will be released privately for friends and family and for organic discovery, focusing on the utility and usefulness of the tool.

In its first stage, users will be able to use a dashboard and input DAO addresses pertaining to:

Using the given information, the dashboard will be equipped to output the following (any of which can be alerted upon for DAO operators):

In a later version of this, we plan on adding the custom reporting system that aggregates the data of the last 3 months into a downloadable document using natural language sections, tables and other types of visualizations.

Following the implementation of the second version of the product, we intend on promoting the tool using already-generated reports and contacting & setting up demo calls with more DAOs to onboard them onto I1. The targeted DAOs will be strategically picked through personal curation and will need to have a good track record and willingness to be part of the product. Furthermore, we will cover the topic of I1 in Twitter Spaces with other DAOs.

As part of the costs structure of the project, there are several areas:

We intend on running the proposal for 3 months and, for the resources mentioned above, we propose the funds come from the SFC’s budget, in the form of STANDARD tokens. For the exact number of tokens, we will be using a TWAP method for the last 30 days, amounting to the following: 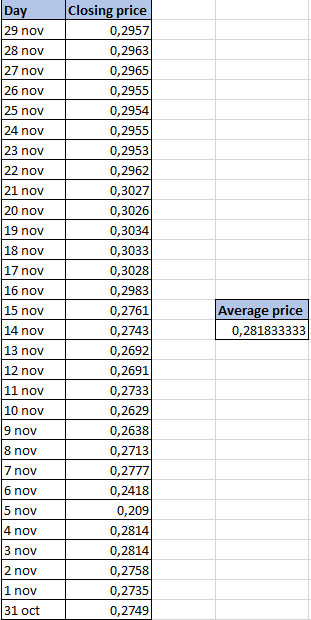 As a result, the total proposed amount for funding the proposal is:

For the KPIs, we consider the project a success if the following take place:

Nice niceee! Happy to see progress on this.
Nothing to suggest in term of improvements

Let’s see what you can do, guys

Something tangible, clear which will help this DAO to position itself in this space. Congrats. Nice initiative!
I’m wondering if you also plan to offer some technical details about how will this be implemented like the process, tools, languages, hosting etc. Or even develop this in the open in a github repository and accept also contributions from the community?

We want this to be an open source project, yes. So that’s key. More specifics will be clear once development starts.
However, re: hosting, process, tools etc. - we aim for this to have as small a footprint as possible and require the least maintenance effort. That means delegate as much as we can to external APIs & services etc.